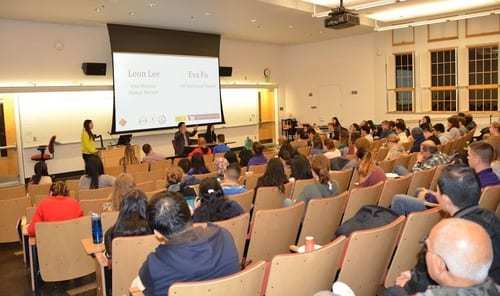 Dozens of audiences recently attended a public film screening of “Human Harvest,” which tells of the extrajudicial killings of Falun Gong practitioners in China for their organs as part of the communist regime’s persecution of the spiritual discipline. The screening of the Peabody Award-winning documentary was held at the University of Washington in Seattle on the evening of November 9, 2017.

The film screening, which was followed by a forum, was co-hosted by Cheryl Yu, a graduate student at the Evans School of Public Policy and Governance, and Liz Harding Chao, the co-chair of the Partnership for Community and Diversity (PCD). The film’s director, Leon Lee, came from Vancouver to attend the event.

During the forum discussion, Eva Fu, a business student and a Falun Dafa practitioner, shared her experience of being persecuted for her faith while growing up in China.

The attendees, mostly students and professors of the University of Washington, were eager to learn more details and asked how they could help to stop the atrocity taking place in China.

Kate, a student at the university, said she had watched a movie depicting organ farming in a futuristic world. She never thought something similar could happen in the real world on such a large scale and controlled by a government.

Kate said she would promote the documentary to let more people know the ongoing crime in China. “Just like the director repeated in the Q-and-A, ‘Knowledge is power’,” she said.

Susan, a student who came to the screening together with Kate, said she didn’t know anything about the organ harvesting crimes before the event. “I didn’t expect it was so bad as it showed in the film. Everyone must watch it at least once. This is an inspiring film,” said Susan.

Five students from Shoreline Community College were invited to the screening by a student at the University of Washington.

“I am happy the doctors and policemen involved had the courage to tell the world what they had seen and experienced. Also, the two ladies in Taiwan told us the stories of their family members who went to China to have organ transplants. They made the documentary more convincing,” said Fatoumata Jammeh, a sophomore international studies major.

“It is most painful to me that they [Falun Dafa practitioners] are not criminals; they just practice ‘Truthfulness-Compassion-Forbearance,’ but they had their organs taken when they were conscious and alive. The communist party showed no remorse for committing this crime,” she added.

She said she would recommend the documentary to her friends and encourage them to attend an event like this. “We believe the world can pressure the Chinese Communist Party to stop this atrocity,” she concluded.

Aung Thiha Kyaw, a student from Burma, said that indifference and ignorance are the biggest obstacles in letting the world know the truth. “If a person doesn’t take the initiative to learn, one will never learn what happened,” said Kyaw.

One student, who asked to remain anonymous because she has family members in China, said about living in China for ten years: “All the textbooks and media reports were negative about Falun Gong. Eventually, no one can tell right from wrong. Even if you know the facts, you are not allowed to speak up.”

“My father warned me not to talk to anyone about this topic,” she added. “After watching this documentary and talking to the director and other people, I felt ashamed at the ten years of living in China. If I don’t do anything in a free country, I am not any different from those Chinese students.”