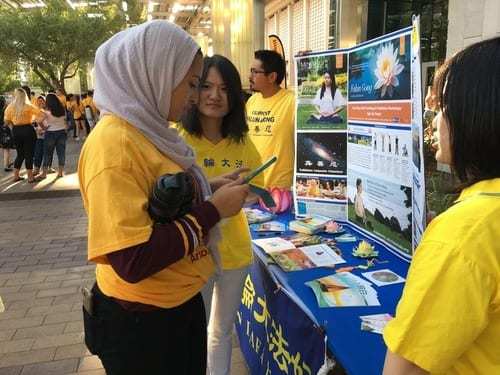 At Arizona State University, the Falun Dafa Club welcomed new students as a part of a larger event on campus on August 14 and 15th. Many students stopped at the Falun Dafa booth and signed up to be notified about upcoming club activities.

Practitioners demonstrated the exercises during the event both on stage and at the booth. Many students learned some of the movements, and several commented about how the exercises were relaxing. An Indian student remarked he could feel the positive energy in front of the Falun Gong booth.

A couple of Chinese students came to the booth and said that they learned about Falun Dafa in Europe. They explained that they had become more open-minded after coming abroad and seeing Falun Dafa so well-received outside China, unlike in mainland China where the practice is brutally persecuted by the communist regime.