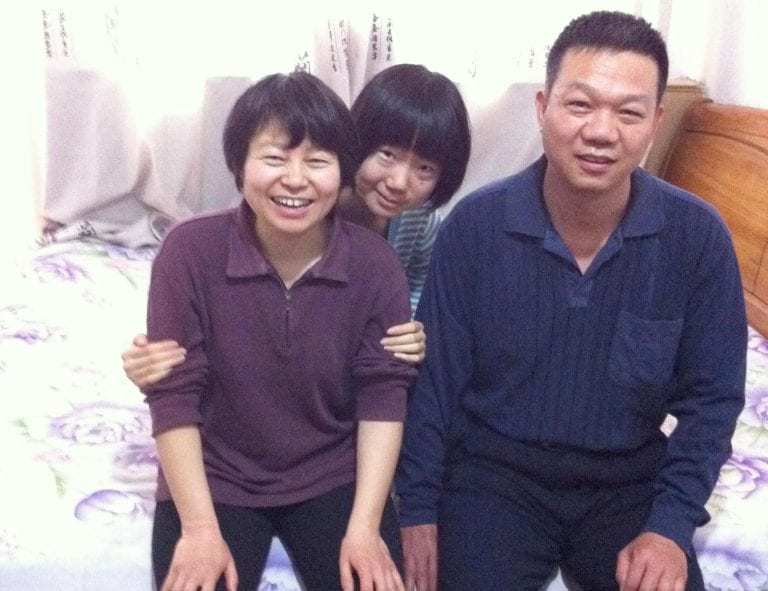 Eva Fu is a Falun Dafa practitioner at the University of Washington. Her father, Fu Xin’ge (付新革), was arrested on September 19, 2018, according to reports from Minghui.org, a website dedicated to reporting on the Falun Gong community worldwide. A major part of Minghui’s work is to track the disappearances and deaths of Falun Gong practitioners in China during this time of persecution.

Mr. Fu lives in Shijiazhuang, capital of Hebei Province, China. He is 50 years old and works as the vice president of the Zhongjiaxin Real Estate Development Company.

Mr. Fu was discovered missing when his wife and daughter Eva, who live in Shoreline, Washington, noticed that Fu stopped answering his phone, which had been their only means of communication with him. Mother and daughter settled in the Seattle area in 2013. Ms. Fu came to the U.S. as a student and the two have applied for asylum.

Their fears were confirmed on September 24, when they found out via a notice posted on Minghui.org that he had been arrested on September 19, 2018, for no apparent reason other than his being a Falun Gong practitioner. A second notice from Minghui reported that the detainees were being held in a secret base in Luquan City, Hebei Province.

The article states that officers from the Ministry of State Security, together with local police, arrested him along with two other practitioners (Guo Xueping, the CEO in the same company, and Duan Haibo, CEO of Jinchao Construction LLC) at their workplaces in Shijiazhuang. A printer, computers, and Falun Gong books were taken by the police at the time of the arrest.

Mr. Fu and other practitioners had been under police surveillance for some time before they were arrested. According to Ms. Fu, her father had also mentioned to the family in a phone conversation that in the summer police came knocking at the door right after he got home from the town 40 miles away where his company is, and where he usually stays. He suspected that they might have tapped his phone to monitor his whereabouts.

Eva remembers surveillance when she lived in China, and being watched by a person near their building. “One time, my mom had a box in the front basket of her bike, and that man kept following my mom for quite a while to ask what was in the box,” she recalls. “He was assigned to follow us.”

The pressure came from all sides due to the propaganda against Falun Gong that saturates Chinese society. “In primary school my teachers knew we practiced and they asked my classmates to ask me if I practiced. The pressure was pretty intense,” she said. “A lot of people misunderstood about Falun Gong and even my classmates were pretty afraid of [the practice]. One boy who used to be friendly to me just punched me in the stomach once he realized I practice. This was in grade 2 or 3. It happened on the playground, the other kids formed a circle and looked on.”

Falun Gong is a peaceful meditation practice that has been persecuted by the communist authorities in China since 1999.  There have been several U.S. House Resolutions supporting the practice and condemning the Chinese regime’s persecution against it. The most recent H. Res 343 addresses the state-sanctioned harvesting of organs from living Falun Gong practitioners in Chinese custody.

If left in detention, Mr. Fu and the other detainees face the dangers of torture, brainwashing, and blood typing as potential unwilling organ “donors.”

We at Friends of Falun Gong urge the public to contact the representatives of Washington State about this matter concerning the safety of Eva’s father. We also ask that the relevant U.S. Federal and humanitarian entities act in a timely matter to rescue Mr. Fu.

“What happened to my father could happen to anyone anytime in China, and so many more practitioners are in this situation,” Ms. Fu said.

“On Minghui there are so many accounts of persecution coming in every day. I hope the U.S. government can do something to stop this persecution and urge the Chinese government to stop the atrocities. Freedom of speech and freedom of belief are born to everyone on this earth and shouldn’t be taken away from anyone. Since Americans value this, it’s time to stand up and stand by these individuals and bring their rights back to them.”

This was originally published on Friends of Falun Gong.