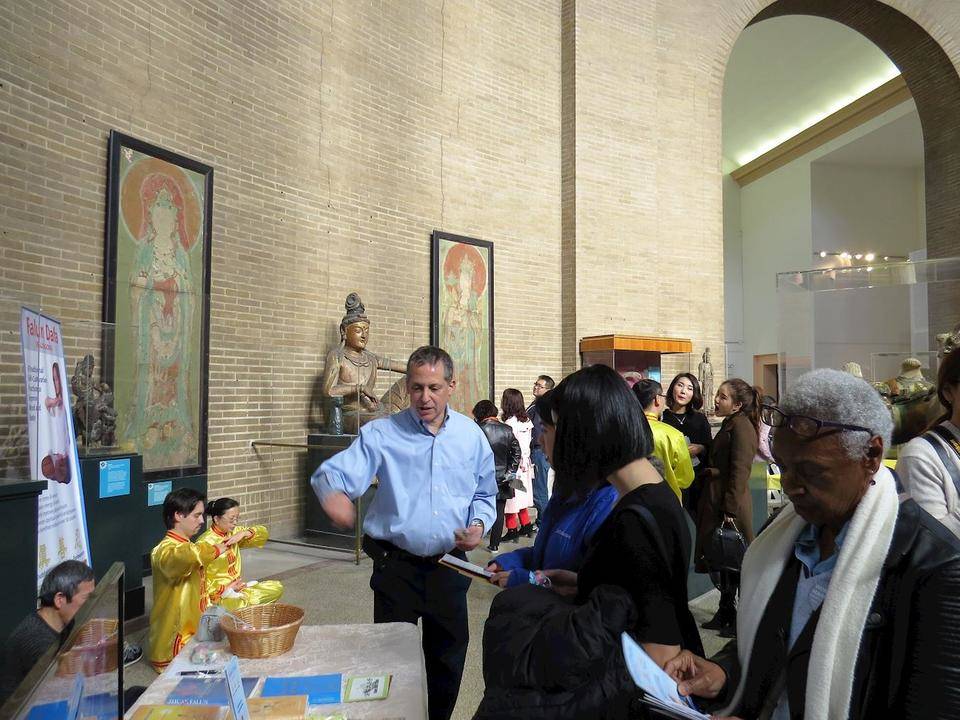 Falun Gong practitioners were invited to the University of Pennsylvania Museum of Archaeology and Anthropology (Penn Museum) on January 27, 2018, for an event celebrating the upcoming Chinese New Year. Practitioners demonstrated the exercises for crowds of visitors, and footage of the practitioners was featured on a network TV station’s report on the event.

For many years, the Penn Museum has hosted activities to celebrate Chinese New Year. This year, besides the booths, there were dances, martial arts, music, and lion dances.

A Chance to Learn Falun Gong 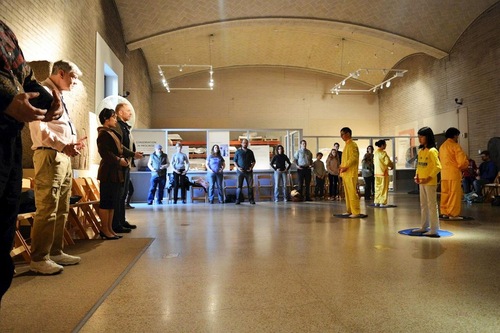 While practitioners demonstrated the exercises by the 13-ton Sphinx, dozens of spectators followed along to learn the movements.Phil, a practitioner who talked with attendees at the event, shared his own experience of the practice. Years ago, he and his wife Yvette visited the clergyman who had performed their wedding ceremony three years earlier. The clergyman showed them the books Zhuan Falun and Falun Gong, and Phil ordered the books online. The day the books arrived, Phil read the first forty pages of Zhuan Falun and went to bed. However, he woke up a couple of hours later: “My body was full of energy. Then ‘crack,’ my hip snapped into proper alignment.” Phil had been seeing chiropractors for years for neck, hip, and back problems. That night, his hip healed. “It was a miracle,” said Phil. About six weeks later, through reading Zhuan Falun and doing the five exercises, his neck and back problems vanished. Over the next several months, allergies and other health problems also disappeared. Phil and Yvette have been practicing Falun Gong ever since that night.

A spectator named Andie said she’d tried many kinds of yoga before, but Falun Gong seemed unique. She was pleased to learn that she could download the teachings for free from the Falun Gong website. 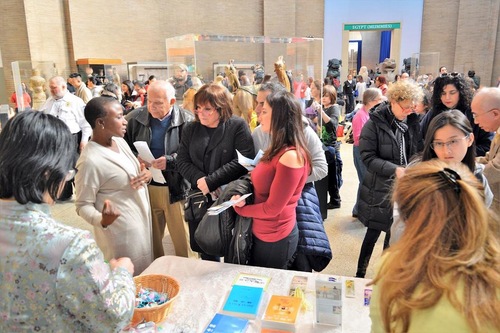 At the Chinese Rotunda, many visitors who were interested in the practice, as well as Chinese visitors who had questions about the persecution, visited the practitioners’ booth.

Terri, a practitioner who has participated in this event for years, said, “A student who was born in China and grew up in Hong Kong asked me many questions today.” Terri answered them all and the student seemed grateful to finally learn the real story of Falun Gong and why it is persecuted by the Chinese communist regime.

Another practitioner, Mr. Leng, also spoke with many Chinese visitors. Most of what they had heard about Falun Gong was propaganda fabricated by the Chinese regime and former Chinese dictator Jiang Zemin, who single-handedly initiated the persecution in 1999.

Mr. Leng told a group of Chinese students how the Chinese regime harvested organs from living practitioners incarcerated for their faith and killed numerous innocent practitioners just to profit from illegal organ transplants. The chatty students suddenly quieted down and listened carefully. They continued to ask questions. Eventually, two of them decided to withdraw their membership in the Communist Young Pioneers to take a stance against the regime’s crimes.

Fox 29 filmed the practitioners’ exercise demonstration and CBS 3 aired footage of the meditation in its evening news. Robert, one of the practitioners meditating, has been a practitioner since he was 15 and has kept at it for the past 16 years. Before that he’d been to many churches and read some Buddhist sutras but was still confused. “The first time I read Zhuan Falun (Falun Gong’s main book), I was amazed by how it explained such profound principles of cultivation in a way that was easy for me to understand,” said Robert, a Ph.D. candidate in psychology.

Robert’s experience with the practice has inspired him to work to help today’s youth. “I’ve been a therapist for teenagers for five years and know how easy it is for young people nowadays to become lost in this world, causing problems for themselves and society. Falun Gong and its principles of Truthfulness-Compassion-Forbearance can certainly help young people find their way,” Robert said.