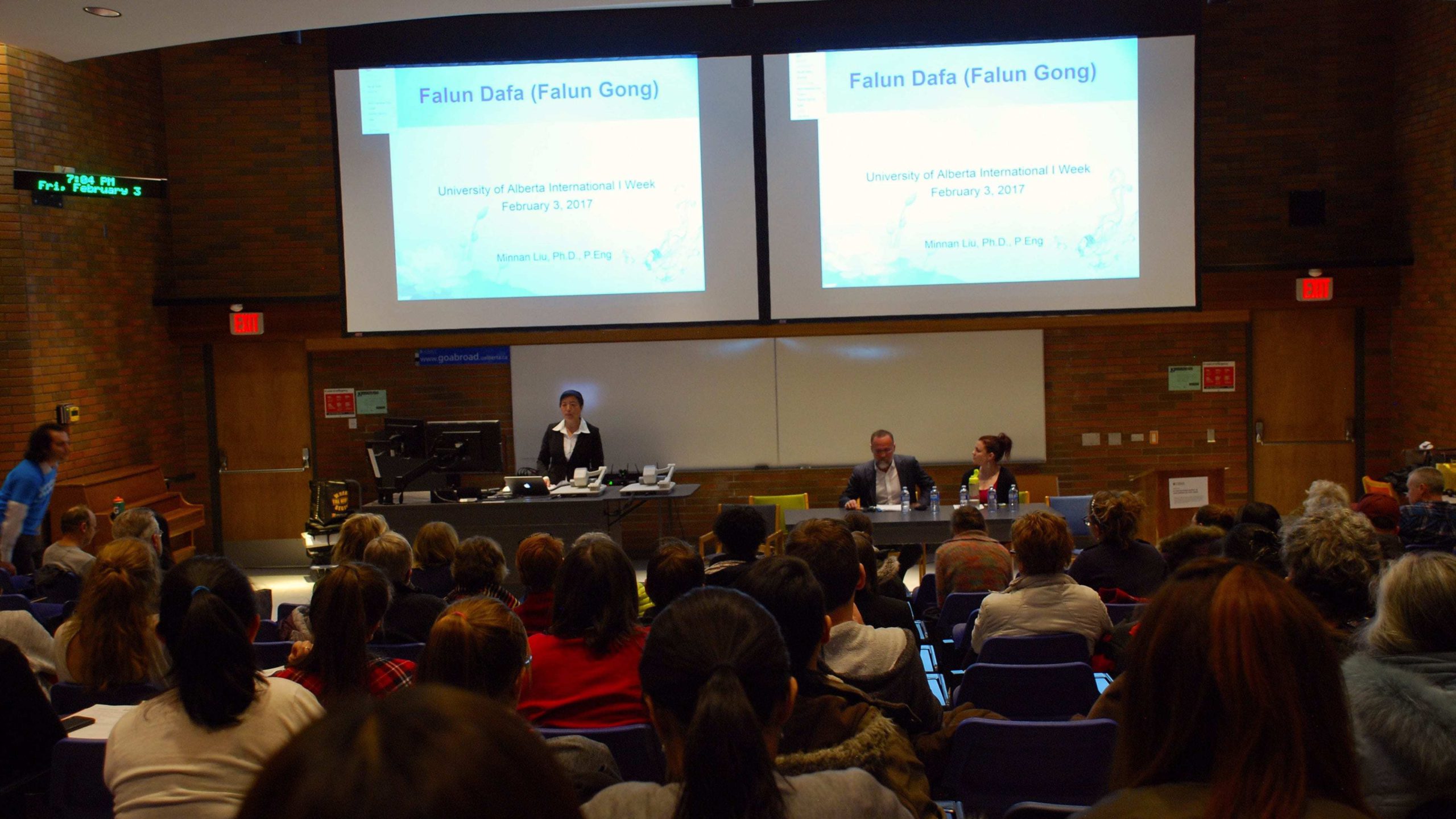 By Omid Ghoreishi, The Epoch Times

During the University of Alberta’s annual International Week, or I-Week as it has come to be known, participants got to see an award-winning Canadian documentary about a horrendous human rights abuse in China and engage in discussion with a panel of medical ethics and social experts.

I-Week is the U of A’s largest annual extracurricular educational event meant to “foster global citizenship through engagement with today’s most pressing issues.”

“Human Harvest,” directed by Vancouverite Leon Lee, was screened on Friday, Feb. 3, to a 250-person room packed to capacity. The film, which has won the prestigious Peabody Award among many others, explores the issue of state-sanctioned forced organ harvesting from Falun Gong adherents in China.

There’s a real inherent danger in passively standing by and letting any kind of atrocity happen in any part of the world.

Also known as Falun Dafa, Falun Gong is a traditional meditation practice that follows the guiding principles of truthfulness, compassion, and tolerance. The practice grew very popular in China shortly after it was introduced to the public in 1992, with the Chinese regime’s own estimates showing the number of Falun Gong adherents to be over 70 million. But Jiang Zemin, the leader of the Chiense regime at the time, didn’t like the fact that there were more Falun Gong adherents than Chinese Communist Party (CCP) members, and launched a severe persecution campaign against the peaceful practice in 1999 that continues to today.

Featuring interviews and compelling evidence from witnesses and international investigators, including former Edmonton MP David Kilgour and Winnipeg human rights lawyer David Matas, the film has been recognized for its powerful storytelling in showing how prisoners of conscience in China are used as a live organ bank. In other words, these prisoners are killed to supply the organs needed for the Chinese regime’s multi-billion dollar transplant business.

Kilgour and Matas were the first international figures to launch a broad investigation into allegations of forced organ harvesting in China, publishing their groundbreaking report in 2006. Last year they teamed up with American investigative journalist Ethan Gutmann to publish an update to their initial report, estimating that the number of victims is much higher than initially thought with possibly 60,000 to 100,000 transplants occurring each year in China.

Due to audience members’ lively discussion with the panelists after the screening, the event was extended by 30 minutes beyond its two-hour time slot.

According to panelist Dr. Charl Els, a member of faculty at the department of psychiatry and part of the John Dossetor Health Ethics Centre (which also helped organize the event), “China is the only country on earth that systematically harvests organs involuntarily from prisoners of conscience.”

The source of the organs is mainly Falun Gong adherents, he said.

“We were shocked last year to learn that two Albertans were actually planning to travel to mainland China to receive organ transplants,” said Dr. Els, who is also on the advisory board of the Nobel prize-nominated Doctors Against Forced Organ Harvesting (DAFOH).

“In ethics and in health, we often say ‘think globally and act locally.’ I think one of the local actions could be sending an email to your local MLA, saying this is an issue we need legislation on, to ban Albertans from travelling to China for organ transplantation.”

‘We Can’t Allow This to Happen’

Panelist Dr. Glynnis Lieb, a social psychologist and labour activist, said that people need to be more concerned about the atrocities that are happening around the world, including the issue of forced organ harvesting, and pointed to how the Chinese regime spreads propaganda in support of its campaign of persecution against Falun Gong—not unlike how Nazi Germany had its own propaganda campaigns to vilify the Jewish people before the Holocaust.

“We see that when we look at any situation where there’s massacre and execution of people, there’s an ongoing propaganda campaign that’s proliferated typically by the key minds behind it who have a political agenda,” she said.

There was also a presentation by Zhang Ping, a Calgary resident who was forced into detention for more than 1,000 days over the past 18 years by the Chinese regime for her practice of Falun Gong. During her detention, she underwent multiple blood tests, which investigators believe were done as part of the regime’s organ transplant business to find an organ match for paying customers.

“This issue does have personal relevance here,” Dr. Lieb said. “We have people who have been directly persecuted who live here, who are residents, sisters, and brothers who live in Edmonton, in Alberta, in Canada.”

For Dr. Lieb, there have been many examples in history showing that people shouldn’t become complacent when there are human rights atrocities happening in other parts of the world.

“We can’t allow this to happen. This is so incredibly important. We have to recognize that everything that happens, it impacts us all, it impacts humanity. What happens in one country impacts people in other countries; it impacts what can happen in the future.”

That is why it’s important to keep having discussions and sharing the information about human rights abuse, she said.

“There’s a real inherent danger in passively standing by and letting any kind of atrocity happen in any part of the world, because it will cause these patterns to continue.”

So why is it that not that many people know about the issue of forced organ harvesting in China? That was one of the questions asked of the panelists.

“Money tends to trump morals,” was Dr. Els’s answer. “Any time I see authorities engage with dominions of China over trade in billions of dollars, we would like to see questions being asked about human rights violations.”

One audience member said she didn’t want to go home until she could raise this point: “I’m thinking about World War II, Dr. Mengele, and what is going on in the concentration camps,” she said, referring to Josef Mengele, the notorious German physician in the Auschwitz concentration camp who was known for performing deadly human experiments on prisoners.

“Human bodies were used to experiment on … it was horrible. Suddenly, in this century, comes this whole barbaric practice … and this is not just a problem for doctors—this is a general and moral problem. How come we have made progress about tortures, Amnesty International, done all kinds of things, but not on this? This is a moral issue not just for doctors, but for everyone.”

This passion, Dr. Els said, should be directed into some line of action. “It is absolutely right, it is a moral issue.”

With reporting by George Qu