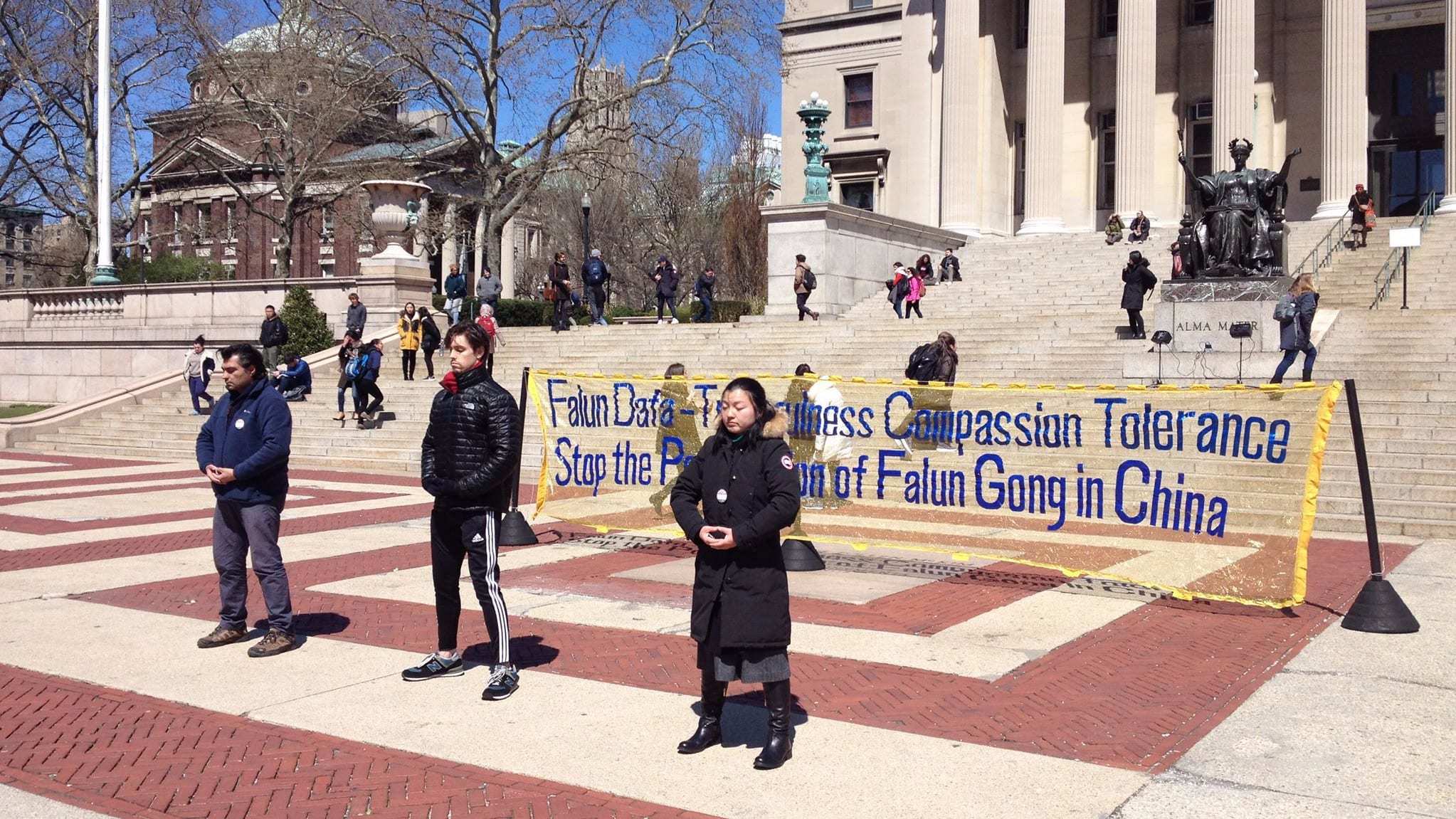 By Leo Timm, The Epoch Times

NEW YORK—It was a bright and frigid early afternoon in the middle of Columbia University’s campus on April 5 when three Chinese women happened to stroll by. Around them echoed the chimes and strings of Chinese meditation music, while volunteers stood by poster boards, ready to talk about one of China’s most censored, and sensitive, topics: the persecution of Falun Gong.

The three Chinese women just happened to fall into the major archetypes of public opinion held by Chinese on the topic: There was one antagonist, one supporter, and one who just didn’t want trouble.

“It’s not a problem if they just go home and practice their meditation,” said Ms. Gao, a middle-aged Chinese tourist in an orange jacket. “But they oppose the government.”

Falun Gong, a traditional Chinese discipline of self-improvement and meditation, has been persecuted in China since 1999, after nearly a decade of tacit endorsement by the state. The anti-Falun Gong campaign, which targeted an estimated 70–100 million Chinese, swept the nation into a frenzy of denunciation and hatred, and the propaganda and vituperation directed against Falun Gong still resonates in the minds of many Chinese today.

Ms. Gao seemed to stand as a stubborn testament to this, outright dismissing the demonstrators and their message using tropes found in official propaganda.

Ms. Wang is a classic case of a Chinese who is not afraid to buck the trend.

“At first I didn’t believe the allegations that Falun Gong practitioners’ organs were being harvested,” Wang said, “but I have seen a lot of videos and read many articles about it.”

Wang has lived and worked in the United States for four years. While in China, she often used a VPN (virtual private network) to circumvent Internet censorship by the authorities in order to access information about human rights issues.

Wang was entertaining her two friends who were visiting from China, and that day they had decided to come down to the university and snap selfies in front of the statue of Athena that stands before the Low Library. It was then that they came across the demonstration—hard to miss—organized and co-sponsored by the school’s Falun Gong and Amnesty International student clubs.

Near a large, transparent yellow Falun Gong banner on the small square were several adherents of the practice doing meditation exercises, while others passed out flyers about Falun Gong and the regime’s repression.

As the joint interview with Wang and Gao went on, they began bickering.

“See? She won’t even let me talk,” Wang said at one point, after being interrupted. “I tell you, we even had an argument over Falun Gong on the bus a while ago. I mentioned all sorts of problems about the Communist Party, but she avoided them all.”

“We’re in the United States now, where there’s freedom of speech,” Wang enjoined. “But she won’t let me speak.”

Li, their friend and the third member of the party, didn’t need to be told not to speak. Standing between the two as the conversation progressed, she refrained from offering an opinion, and at several points nudged at Gao that they should be getting along.

When she finally spoke, she mentioned the need for stability and order as the reason for her support for the Communist Party. “We don’t want chaos or war,” she said, without elaborating.

The poster demonstration has been held on campus annually for years now, said Jean Guo, a graduate student who is part of the Falun Gong student club. The posters are meant to do what Falun Gong practitioners call “clarifying the truth.” They tell people what Falun Gong is, dispel misconceptions about it, and bring to light the crimes committed against adherents in China, especially widespread torture and organ harvesting.

Researchers have presented evidence that they say indicates that hundreds of thousands of Falun Gong practitioners have been killed for a lucrative organ transplantation industry, presided over by the Communist Party’s military hospitals.

Organ harvesting from Falun Gong adherents has been the subject of multiple independent investigations and award-winning documentaries, as well as resolutions by the U.S. Congress, European Parliament, and other international bodies.

According to Guo, the volunteer from the Falun Gong club, many Chinese students are surprised to learn that the university even allows a Falun Gong club, let alone a demonstration in such a prominent place on campus, given how the practice has been slandered in China.

“We let them see that there are also people practicing Falun Gong at Columbia,” Guo said.

A quiet female student from eastern China said that the demonstration was eye-opening. After seeing the Falun Gong posters on campus, she began to question the negative impression she had received of the spiritual practice as a child from state media and in official school textbooks.

“I don’t know if it is because some of the information in China has been distorted,” she offered. “But I think it is pretty good to see a different voice here.”

Juliet Song contributed to this report.