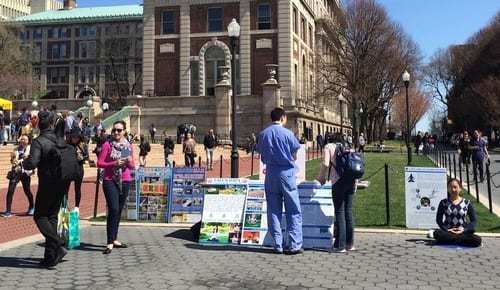 On April 4 and 5, Falun Dafa Club at Columbia University raised awareness at the center of campus about forced organ harvesting of Falun Dafa practitioners and other innocent prisoners of conscience in China. For over a decade, the Chinese Communist regime has been systematically extracting the organs of Falun Dafa adherents for an enormous profit.

Many students and faculty on campus said they were already aware of the persecution and showed their support by signing the petition to the UN High Commissioner for Human Rights condemning forced organ harvesting Falun Dafa (also known as Falun Gong) practitioners in China.

Mr. Liu, a Chinese tourist who happened to pass by, was happy to see Falun Gong on campus. “It’s really great that you young people are telling people about Falun Gong.” he said.

“I can’t believe the police are still following the policy of persecution. They need to see the trend and think about their own future. They will be brought to justice,” he said.

“The Communist Party claimed that they would be able to eliminate Falun Gong in three months in 1999. What can they say now?! Wherever they go overseas, they will encounter Falun Gong [practitioners].”