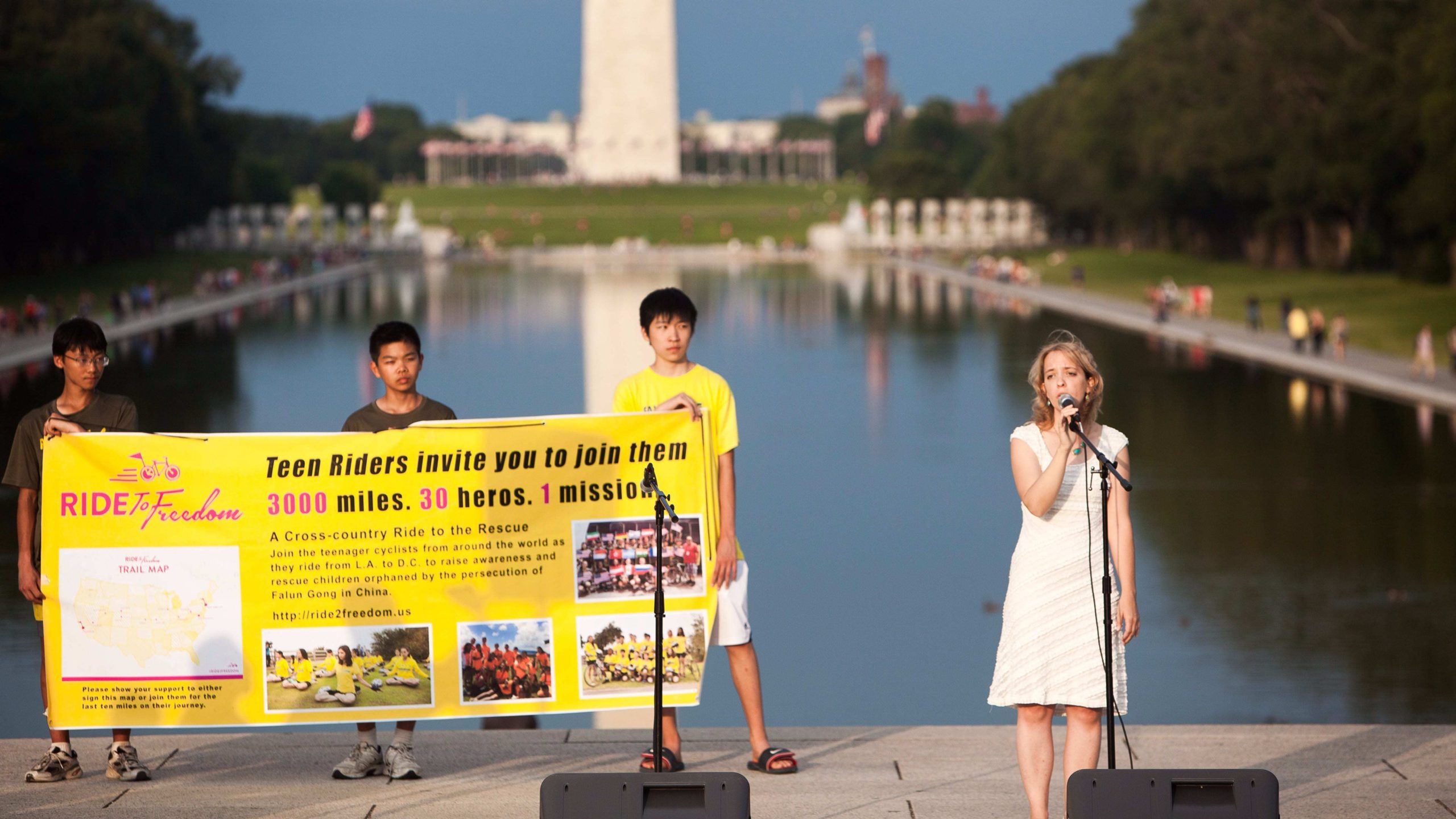 By Mary Silver, The Epoch Times

WASHINGTON—It was the end, but it was not the end, according to one of the young cyclists who just crossed the continent in Ride2Freedom.

Nikita Kraiouchkine, who is 17, stood on the steps of the Lincoln Memorial on July 17. The Washington monument began to turn peach in the sunset. Mother ducks and ducklings navigated the reflecting pond in orderly rows.

Nikita’s teammates stood in orderly rows near him, holding the flags of their countries, or banners calling for an end to the persecution of Falun Gong in China.

“We made it through the Mojave Desert, the Rocky Mountains. Our ride ends here in DC, but our mission continues,” said Nikita.

People sat on the Lincoln Memorial steps to watch, some taking pictures and video of the artists and the athletes.

A marriage proposal was made and accepted, by a handsome man in a suit to a lady in a pink dress. People wore turbans, saris, shorts and flip flops, hijabs, sundresses, ranger hats and biker vests. The atmosphere was festive with flashes of poignancy.

Not all the Ride2Freedom team stood on stage. Several of them circulated in the crowd, talking to people, doing what they rode across the country to do.

Jimmy Ma, age 15, was one of those. Wearing his Ride2Freedom cycling outfit, he began engaging strangers in conversation. He rode 3,000 miles “because I want to stop the persecution.” Since July 20, 1999, the Chinese Communist Party has severely persecuted Falun Gong practitioners in China, he said. “I don’t want revenge for communist China. I just want the practitioners in China to be free.”

He said he thought they had reached people. “There’s a senator who invited us to a party,” he said with a smile.

Arian Pasdar of Austria had a senatorial close encounter. His father’s first cousin is a Senate staffer. “She called and asked for special permission for us to come in the Senate dining room in our riding clothes.” They dined there, rode the private Senate subway, and stood on a balcony that looks across the National Mall.

The 18-year-old finds Americans open. “It’s very nice, because people in America, you can very easily talk about the persecution.”

Mantyk, one of the singers, said: “I want people in China to know we will never forget them and that we will never give up—that we think about them night and day.”

Dowe, a masterful musician, performed her song which warns “People of the world, don’t be an accessory to inhuman violence. I am an accomplice if I watch in silence.”

The Ride2Freedom cyclists are not silent.